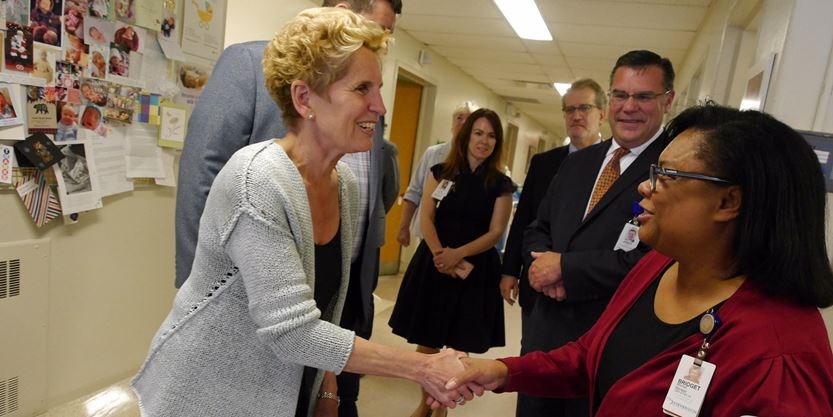 Representatives from Stevenson Memorial were happy to show Kathleen Wynne around the hospital and say it’s the only way she’ll understand the need to have it redeveloped.

The Ontario Liberal leader stopped by the Alliston hospital to tour the obstetrics unit and to speak with volunteers as a photo opportunity.

She did not make any announcements or take any questions from the media.

Jody Levac, president and CEO of Stevenson Memorial Hospital, said he has spoken with Dan Hambly and the Jim Wilson, the local Liberal and Conservative candidates for Simcoe-Grey, about the need and desire from the community to see the hospital redeveloped.

“It’s probably the most essential and political issue for this community,” he said, adding healthcare shouldn’t be about politics.

“There are no new messages here, I think it is just bringing attention to the matter.”

Dr. Barry Nathanson, chief of staff at the hospital, said visiting the hospital is the only way Wynne can come to understand their needs.

“We all know the Liberal government has done a great deal to develop health services in many different ways during the time they’ve been in office,” he said. “The fact of the matter is that it is time for Stevenson, its time for hospitals like Stevenson, to get the attention that we’ve been hungry for and that has grown from a want into a clear need.”